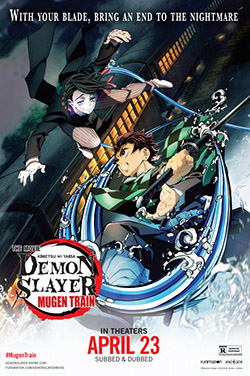 The Japanese series, Demon Slayer, ended in late 2019 in order to produce the latest movie that followed up their first season into an animated dark fantasy film that broke records in Japan. Now in the U.S, it’s already made over $400 million in profits which greatly exceeds the studio Ufotable’s $65 million dollar budget.

The show itself is about a young boy named Tanjuro Kamado, who became a demon slayer in order to find a cure for his sister who became a demon and find the one who murdered his family while he was away. He finds two other companions and sets off on a mission to train while a high-rank demon is sent to kill him.

Demon Slayers specialize in breathing techniques in order to strengthen their bodies to use a sword that could kill a demon by decapitation. Demons on the other hand are beings that eat humans, regenerate, and use magic. Demons can only survive at night and get stronger by eating more and more people.

Demon Slayer’s highest rank is known as a Hashira as one will feature at the start of the movie known as the Flame Hashira, Rengoku. Demon’s highest rank is known as the Twelve Kizuki, or the 12 Demon moons, as the weakest are the lower six moons and the highest are the upper six. The movie features the lower one as a villain that specializes in killing others in their sleep in the trailer.

Tanjuro’s sister, Nezuko, is different from other demons as she resists the urge to eat and travels with her human brother. The other two companions, Zenistu and Inosuke, are fellow demon slayers that have their own breathing techniques and strengths. Zenistu is a coward that can only attack once he sleeps while Inosuke is a wild man with a boar head that only thinks of getting strong.

The series, while only having 26 episodes, was produced by Ufotable, released by Aniplex, and aired in Japan from April to September 2019, only soon to be trending on Twitter for the best visual and action pack episodes. The movie soon became the highest-grossing anime film and Japanese film of all time, beating the famous 2001 film, Spirited Away.

The movie was spectacular as the amazing animation and visuals throughout the film were breathtaking and each fight scene was mesmerizing. Considering the budget, the visuals take the already fantastic visuals of the anime to a whole new level of phenomenal art. Many parts of the movie have a lot of funny humor, especially with the interaction with character’s personalities such as Inosuke, Rengoku, and Zenistu. It has turned dark soon enough with several events that happened during the movie, which introduce a reason to want the main character to win no matter what.

The music and sound quality were top notch and the decision to go with the originally made sub-version, English subtitles with Japanese voice actors, or watching the dub version, completely in English with English voice actors, can be preferable. What I recommend is the subversion as it fits the characters way better than the dub version.

Overall, the movie is really good and I would recommend it to those who enjoy a good story and visually amazing action swordplay. I also recommend the show, which is available on Netflix and Hulu, since it’s amazing to watch as well. The movie is a 10/10 and it’s worth watching completely.

You can watch the trailer here: