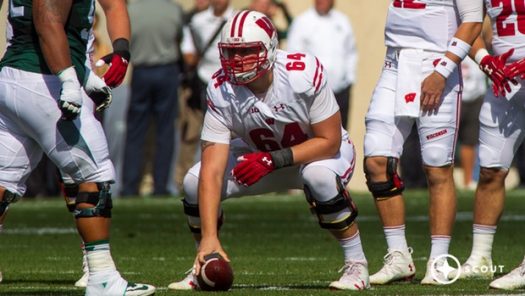 “Ready, Go!” yells Wisconsin Badgers quarterback Alex Hornibrook. Brett Connors, at 6’6” and 306 pounds, hears the call, and flings the football back from the line of scrimmage into Hornibrook’s waiting hands. Connors explodes into action. He sees who he needs to block and he does his job. The Wisconsin running back flies through a big hole that Connors created. The play results in a first down for Wisconsin. Connors is currently starting center for the Wisconsin Badgers. Number 64 on the back of his jersey, Connors graduated from New Berlin West in 2014.

Connors’s 2014 season on the Badgers wasn’t very eventful for him, as he was a redshirt freshman. In his 2015 season, things changed. Brett earned his first letter and saw action on the field. He played in two games, his first one against Miami on Sept. 12th, his second at Nebraska on Oct. 10th. He also was an academic all-big ten honoree in 2015.

His 2016 season was when things really started to pick up. His first start for the 2016 season was at Michigan State. Connors started in place of left guards Micah Kapoi and Jon Dietzen who were both fighting through injuries at the time. It appears his coaches were impressed by his performance, as he remained at his place on the starting lineup for the next game against Michigan. Connors’s 2016 season is still unfolding. Only time will tell what kind of force the New Berlin West alumni will be on Badgers.

An article from the Milwaukee Journal Sentinel stated that Connors doesn’t just play center, he is sort of a jack-of-all-trades on the O-line. He has taken many reps at all spots there.

After walking away from spring practice believing he had earned the trust of the coaches, Connors said,  “I know the offense. I’m here to play. I want to do what is best for the team. That is when I felt really confident in myself to let it go and just play.” This quote was also also featured in the Journal Sentinel.

A quote from head coach Paul Chryst, also featured in the Journal, said, “He is a guy that knows what to do. He is accountable. Guys trust him.”

Former New Berlin West Football coach, Patrick Detmer, had a lot to say about Connors. Detmer, who worked with Connors from his freshman year in 2010 to his senior year in 2013, had many positive things to say.

“We knew that he was a special player from freshman year,” said Detmer. “We knew from the outset he could play D1 football. It’s one thing to have the opportunity to play, it’s another to have the drive and work ethic to want to go and earn that. He had that passion.”
Detmer also said, “[Brett] is a lot of fun. Great sense of humor. He always enjoyed being out on the field. He had sheer fun playing, [which] I enjoyed. He would get vocal, he would rally the guys. He would get them fired up to play.”