The Boring Company Releases the Not So Boring Flamethrower 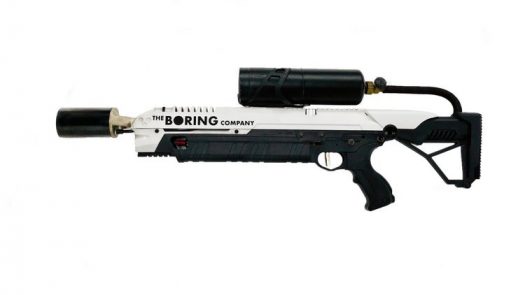 ▲
A quick look at the flamethrower created by The Boring Company.
Entrepreneur

▲
A quick look at the flamethrower created by The Boring Company.
Entrepreneur

A flamethrower is a weapon that sprays out burning fuel. There is two tanks that the user wears. The first tank is a flammable liquid and the second is pressurized gas. The fuel is carried through a hose into a gun by the pressurized gas where the liquid fuel is ignited into a flame and shot outwards.

Many would say flamethrowers are good for military purposes, some may even say that they are arsonist’s weapons, but Elon Musk would say they can be used for fundraising.

Those are probably the two companies that Musk was a part of that most people use on a daily basis. That by no means are the only companies Musk has founded or co-founded. Musk has also created SpaceX, The Musk Foundation, NeuraLink, and The Boring Company. Yes, you read that last one right, the Boring Company.

The Boring company was founded by Musk, He got the idea when driving in traffic and thought there must be a solution to all of the traffic. So, he created the Boring company.

The Boring Company wants to engineer road tunnels underground. In the words of The Boring Company, “To solve the problem of soul-destroying traffic, roads must go 3D, which means either flying cars or tunnels. Unlike flying cars, tunnels are weatherproof, out of sight and won’t fall on your head. A large network of tunnels many levels deep would fix congestion in any city, no matter how large it grew (just keep adding levels).

The key to making this work is increasing tunneling speed and dropping costs by a factor of 10 or more – this is the goal of The Boring Company. Fast to dig, low cost tunnels would also make Hyperloop adoption viable and enable rapid transit across densely populated regions, enabling travel from New York to Washington DC in less than 30 minutes.” (The Boring Company)

Musk thinks drilling a network of underground tunnels is the perfect solution to congestion in city traffic because The Boring Company can keep adding levels deeper. This does raise some questions like will the heat of the Earth’s core deteriorate lower level tunnels faster than the normal aging process? Or will digging all of those tunnels slowly pollute the earth faster?

Musk says though that they will deteriorate slower than above ground because they won’t have the harsh weather affecting them. Well he hasn’t said if they will pollute the surrounding dirt and other things. He has said that because all of the construction will be done underground it will cause zero noise pollution and will be invisible and won’t take up needed land space.

How they are going to physically dig underground is by using a T.B.M. which stands for tunnel boring machine.  The T.B.M. is large and bulky making it super slow. They are so slow that if you are to race a T.B.M. and a snail then the snail would win. The T.B.M. would actually be 14 times slower than the snail. This is a big problem because the slower the T.B.M. the longer these tunnels take to dig and construct. Now the longer the project takes then the more expensive the project gets.

Now The Boring Company has plans that will increase the speed of their T.B.M.s. Their first idea is to increase the power/output by three times. They plan on achieving this by heavily upgrading the cooling systems.

Currently the T.B.M. digs for half the time and builds tunnel support structures for the other half of the time. This is inefficient because the time it takes building support structures is time the machine is not tunneling. So with a design change to the Boring Company T.B.M.s would mean the T.B.M. would continuously dig shortening the length of the project therefore saving money.

The T.B.M. machines are powered by diesel engines currently so if they converted the engines to electric engines they could help the environment and speed things up.

Now lots of people are wondering if the whole U.S. was connected by tunnels then could a giant earthquake eliminate the whole system which would cost money and time to repair. Now the U.S. wouldn’t go into chaos because actually tunnels are actually the safest place to be during an earthquake. Part of this is due to the fact that buildings are perpendicular to the earth while tunnels are parallel. Plus there is mass destruction during earthquakes because of all of the falling debris but a tunnel is underground and therefore debri can’t fall directly on it to damage it.

People are also asking when the Boring Company starts tunneling wouldn’t it be really noisy. The answer to that is no, believe it or not.  The sound of drilling 28 feet below the ground (which is the depth they will start tunneling) is almost, if not completely silent.

This whole idea sounds super planned out and super effective except for the fact that the excess dirt would add up quickly. First if we look to how a normal excavation project dispenses their excess dirt we can see that they dump it at a different site. This creates noise from all of the machines and vehicles, and not needed costs. And other environmental problems. So to avoid all of that the Boring Company will process the dirt and convert all of the excess dirt into bricks. These “earth bricks” will be used for the lining of the walls for the tunnels as well as other materials.

This may sound like a subway but it is very different because for one thing there are no trains just cars on electric skates. Also along the tunnel are entrances and exits. Due to the electric skates being all seperate units the passenger/car can go directly to its destination without having to stop at other stops.

The entrances and exits will be car elevators along the road. Now there will be no congestion due to the fact that these stations will be the size of a parking space making them easy to have tons of these entrances right next to each other. The car will go down and into a little mini tunnel or shoot that connects to the big tunnel system.

To a first look this seems like the perfect solution to traffic but then why isn’t this already in place. Well to connect just the whole United States with this kind of tunnel system it would cost hundreds of billions of dollars maybe even a trillion or two. For this to even be a possibility Musk says The Boring Company will find a way to reduce the cost of tunneling by about a factor of ten.

Now reducing the cost of tunneling by a factor of ten is not as easy as it may sound. Though Musk has started brainstorming ways to make it easy though. Currently the standard size or diameter for a single lane road is 28 feet. His way of reducing that size is having cars actually not even drive in the tunnels. They will all go onto an electric platform or skate. This will not only eliminate a lot of pollution if people turn off their cars in the tunnels but would also eliminate human error because a machine is controlling the skate. They have to make roads longer than the width of a car or truck to account for human error. So without human error they can decrease the width of the roads. The Boring Company says that they can make the road’s diameter 14 feet at maximum if not less. Now just that alone would be enough to reduce tunneling costs with estimates at around 3-4 times.

To dig tunnels miles long across cities underground costs a lot of money and they need to fund it somehow. The Boring Company started off humbly by selling black baseball caps with “The Boring Company” in white letters. When that did well with over 35,000 sales and over $700,000 in profit, Musk decided to up the ante “upgrading” the merchandise.

Somebody reasonable may start selling shirts but Musk wanted to up the ante miles high. He stopped selling hats and started selling flamethrowers. Yes, the weapons used in wars to burn down vegetation and buildings.

For only $500, a flamethrower could be yours and you can even pay with PayPal. At first it seems like a joke until you scroll down Instagram and find an Instagram video of two Boring Company employee’s wielding the real deal.

Many people have stepped back to not jump to conclusions, and to ask a few questions.

That is exactly what tech reviewer Marques Brownlee thought when he tweeted, “I mean sure I’ll preorder. This feels illegal doe…”.

To which Musk responded, “ATF says any flamethrower with a flame shorter than 10 ft is A-ok. Our design is max fun for least danger. I’d be way more scared of a steak knife.”

To which Brownlee finished the conversation with, “Fair enough. Let the Marshmallow roasting begin.”

Musk would know a lot of other people would jump at this idea, but they don’t know about the Boring Company. He started tweeting away.

For example he tweeted, “Obviously, a flamethrower is a super terrible idea. Definitely, don’t buy one.”

Then a few seconds later he followed up with another tweet saying, “Unless you like to have fun”.

At one point he also tweeted, “The rumor that i’m secretly creating a zombie apocalypse to generate demand for flamethrowers is completely false”. These tweets really got people interested.

A lot of folks feel Musk exploited a loophole and created an easy market for anyone interested in buying a weapon. California Assemblyman, Miguel Santiago, is looking into creating a sales ban for the weapon.

The company has received permits to build a two-mile test tunnel in the Culver City suburb, where Musk’s private spaceflight company SpaceX is headquartered. “This deviation feels like a slap in the face.”” (TheVerge.com)

Though the controversy can be put to rest because the sales run is done and they have reached their goal of selling 20,000 flamethrowers is complete. So if you do the math then The Boring Company made 10 million dollars. With so many people scared about safety Musk agreed to ship a free complimentary fire extinguisher with each flamethrower purchase.

People are now questioning if the flamethrowers that The Boring Company is selling is even real or just an early April fools joke. Though whether this is real or not it did spread the word of the not so boring, Boring Company.