Solo Flies In As Another Great Film 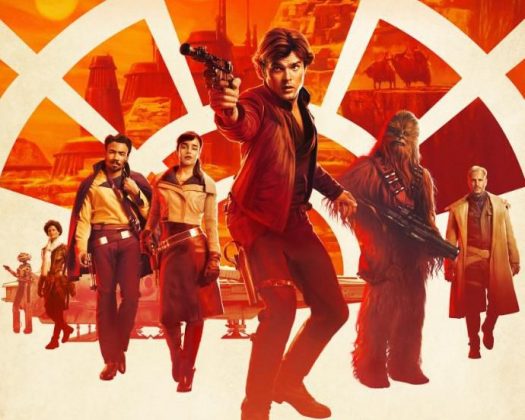 Han Solo is one of, if not the best, character in Star Wars and the love for him is shared by thousands. Ironically, many were doubtful about the film with some even saying, “I’ve got a bad feeling about this”. One of the main reasons for this lack of faith is nostalgia. People have grown to know and love Harrison Ford as Han Solo. In my opinion the viewers will get more out of the film viewing the main character as Han Solo instead of as the actor, Alden Ehrenreich. If the viewer does this then they will start to see the plot, characters, timing, sound, and the visuals just pop out.

The movie is about Han Solo in the criminal underworld teaming up with old friends and new ones too. They go on missions and heists from a variety of gangsters trying to steal a resource called Coaxium, a type of hyperfuel while trying to avoid marauders with the same goal. It should be noted that, like Rogue One, this is a stand alone film so it is not a continuation of any trilogy but rather it’s own story. It should also be noted that the film is about Han Solo himself and not about the galaxy or an event like other Star Wars films.

The good thing about this film is that because as a stand alone film it is just as exciting if you haven’t seen any other star wars films or if you have seen all 9 other films.

Another good thing about it being just about Han is that it allowed Ron Howard, the director, to really explain where some of the more iconic things related to Han came from. For example we see where his pistol, ship, cocky attitude, his 12 parsec Kessel Run and his tendency to owe people money come from. We also learn how Han started his partnership with the famous wookie known as Chewbacca. We see more criminals and criminal syndicates like the Crimson Wave as well. This was done well, as fans have started to want to see more of the giant criminal underworld in Star Wars, other than Jabba the Hutt and the Hutt Cartel.

The timing in this film was very well done as it had a fast pace which really allowed the action to pop. Even times when there was talking I felt it was just enough to give the viewers an understanding of the of the event while not being so long that it starts to lose the message. The action scenes were also timed well. For example you could really feel the rush of Han and the crew in the Kessel Run which helps explain why Han’s so proud of it.

In movies most of the timing is more noticeable with good music. This movie is no exception and the thanks can go to composers, John Powell and John Williams. I do have a good memory of a scene where the beat of the drums started to speed up my heart beat and it got me more excited in one of the scenes. John Williams always has a way of hyping up action scenes and damping the mood of sad scenes with just his compelling music.

However, no movie is complete without visuals. In this film the visuals brought us back to our favourite galaxy with more stunning sights. The CGI in this film was done well and it was blended into the film naturally. The grit and grime of the criminal underworld was portrayed beautifully.

There were many chase sequences and the intensity was brought on by the camera angles that made you feel like you were Han in the chase. The camera angles were also well done in scenes where there were duels between two characters. They also used far away shots to get the feel of a location before following the main characters which helped viewers transport themselves into the film.C

With all of these elements combined, Disney pulled off another stunning Star Wars Film. I personally thought the film was amazing even though many did not. As of the time of writing this it has a 72% on Rotten Tomatoes and a 5.6/10 on IMDB. Don’t let that deter you from seeing the film as Han would always say, “Never tell me the odds!” Though, like stated before, you have to realize this is about a character and not an overarching event. While there are some more discreet overarching plots there is nothing on the scale of The Rebellion vs The Empire so appreciate the scale of the film. Also I would highly suggest not letting Harrison Ford’s nostalgia get in the way of Alden Ehrenreich’s performance.  With that being said it, was a great movie and I would recommend seeing it with someone or even just solo.