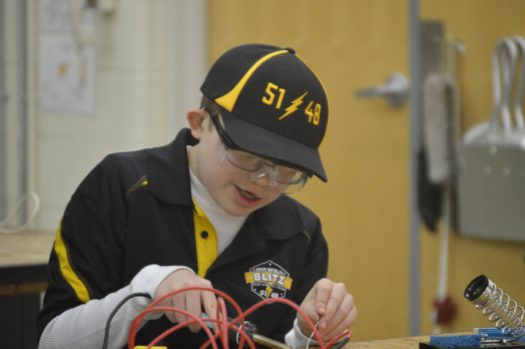 The New Berlin Blitz Robotics Team 5148, is composed of 7th-12th graders.  Each year they take on the task of creating a robot in six weeks to eventually be placed in competition.  Along the way, they hold many outreach events, to help inform the community of what they do. On October 27th, Team 5148 will be holding their annual STEM fair at New Berlin West from 12-5 P.M.

“We will normally start by brainstorming hundreds of ideas,” Joshua Warner, a fourth year mechanical member said, “then pick the best ones and start planning out what we need and who we need.”

The robotics team plans out many activities to hold at the event.  The activities should be appealing to both adults and children. Some of the events that will be held at this year’s STEM fair is: robot driving, button making, LEGO robots, showcases, coding, laser cutting, 3D printing and more!  After deciding what stations the team wants to have, they then choose who will be apart of each station. Mentors and teachers do not run the booths, and instead are run by the members.

“I am going to be at the button making station.”  Said Matthew Yeates. “One tradition of FIRST robotics is button making.  At this station, people can design their own button then have it stamped into a badge.”

Yeates is in his fourth year of working with the team.  He works both on the mechanical team, and as the safety captain.  He will be working with a few other team members to run the button station. This station has high popularity and doesn’t fail to exceed people’s expectations.

Most people consider driving the robot the main highlight of this event.  This activity allows anyone, whether experienced or not, to test drive the team’s competition robots.  While driving, a member will explain the tasks the robot had to complete for that year. This year, the team will have a field set with obstacles, from the previous competition.  Visitors can drive the robot normally, or attempt to win a match!

Over the last three years interest has increased involving the STEM fair, and as of such over 300 people showed up to last year’s event.  People who attend the fair are able to explore more about robotics, and learn about the future of STEM.

The robotics team tries to come up with new activities to have at the fair each year, to keep the event interesting and current.  This year they have reconstructed and added many new activities. New Berlin Blitz’s goal for the STEM fair this year is to get as many people to visit as possible, and to inspire and teach the community about the future of robotics.

“I just really love the fair so much,” said Addison Gensch, a business member for the team.  “It’s very exciting, and hands-on while showing off truly what STEM and robotics are all about.  It doubles as both a fun carefree experience and a great learning experience.”

Both members and visitors enjoy the STEM fair, so be sure to visit!