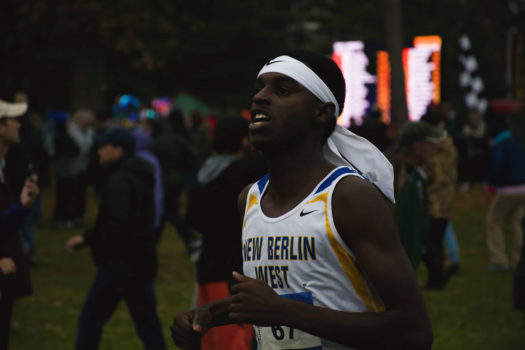 While most students were busy celebrating Halloween weekend, Grady Davis and Jordyn Nyenhuis, both first time state qualifiers, headed up to Wisconsin Rapids to run at the WIAA state cross country meet on October 27th.

Davis’ journey to get to this point was most definitely not an easy one. Being a junior, he has now done cross country for three years, being on varsity ever since he was a freshman. It has been a grind to the top though: and he had to make a comeback after being injured his sophomore season.

“How I came back from that [injury], I had to keep telling myself that it was going to be better. I had two more years of high school left at that point. I remember I was like, if this one [race] doesn’t go well, we’re definitely gonna make it the best we can in the next two years to come.”

For those who were not at Davis’ sectional race to witness him qualify for state, it was a sight to see. With a wide grin on his face, Davis was screaming out of joy in the last straight away of the race, knowing what he had just accomplished.

He continued this momentum into his state cross country meet. The 3.1 mile long 5k course at Ridges Golf Course in Wisconsin Rapids is known to be tough on it’s runners, with long rolling hills usually ran at very cold temperatures.  Davis and Nyenhuis did not let this affect them, however, and both ran their fastest 5k times ever.

Nyenhuis was the last of the five individual qualifiers from her sectional meet, running a time of 21 minutes exactly. She went on to run a personal best time at the state meet, running a time of 20:52 and placing 66th, the first time she had ever ran under 21 minutes.  “No matter how hard the workouts might seem they really do pay off. And no matter how long they may seem they pay off, every practice pays off,” Nyenhuis said.

Nyenhuis was convinced into joining track and field her freshman year, and followed through to join cross country in the fall her sophomore year as well.

“I am very happy I joined! My first year went really well,” she said.

Nyenhuis, only a sophomore,  luckily enough has even more time running for New Berlin West, along with Davis.