Night of the Living Debt: Students loans will turn your life into a horror story 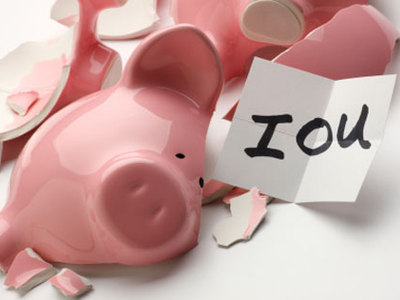 What do you want to do after high school? If you don’t say college, your family is going to immediately throw you out on the streets or ask themselves what they did wrong while you just sit there getting your feelings deeply hurt. In our society, it’s almost an expectation that your next step after high school is college. If you can’t afford college, then don’t worry. You can easily take out some student loans. Because you’ll be making a lot of money when you get out of college, so you’ll be able to pay your loan off, right? If you think that, reality is going to hit you and hit you hard.

Student loans are the “normal” way to pay for college. It’s horrifyingly easy to take one out. A kid straight out of high school without a job can take out a loan. The reason student loans are being granted to just about anybody is that they’re federally insured. This also plays into why student loans are branded as “good” debt. They’re not good for you, the student, but good for those who grant them. Because these loans are federally backed, they will follow you to your grave and even bankruptcy won’t save you from them.

Given this, student loans ruin lives. Financial expert and radio host Dave Ramsey said, “Every day I talk to someone who’s got $100,000 or $200,000 or $250,000 in student loan debt. 100% of these people are completely emotionally overwhelmed. They’re paralyzed. They’re terrified. They do not know what to do.”

What happens to the students who take out loans? Dave said, “Who they were supposed to become—they can’t [become that]. Because they’re walking around with this 400-pound ball over their head, and they’re trying to balance that and live a life.”

To see the devastation student loans cause, author Anthony O’Neil’s story tells it all. At 19, he was $35,000 in debt and homeless, living in his car. O’Neil was following what everyone called normal, explaining, “Normal is trying to finance things that I really could not afford at all. Normal is trying to impress my friends and go to the same school that my friends went to. That normal ended with me in the back of the car.”

Now here comes the horror story part of this article. Take a look at 70-year-old Ken Stumpf from Colorado, who took out $70,749 in debt to get his college degree. Over the years, his balance has risen to $81,000. Stumpf may be 70, but he hasn’t been able to retire and still works 25 hours a week.
The Federal Reserve estimates that student loans are at an all-time high for 2019 at $1.6 trillion. Around 70% of Americans take out loans to pay for college. Do you want to end up another victim of the student loan crisis? It’s time to accept Oprah’s not going to magically show up at your graduation and save you. How can you go to school without student loans?

One option is to not go to college at all. Of course, if your dream job requires a college education, then there are still ways to go without debt. But many overlook this option. The idea that the only way to be successful in life is to go to college has been pounded into everyone’s heads. Starting your own business, going into the service industry, taking a gap year, joining the military, and trying an apprenticeship are a few alternatives to the college education.

If you’re going to go to college, there are better ways to pay for it than with student loans. Scholarships are the obvious answer, since applying for scholarships can earn you free money and everyone loves free money. If you don’t get a scholarship, you can work through college. Working part-time isn’t going to kill you, and when you graduate college, you won’t have a gigantic student loan debt looming over your head. This also means that you’re not going to live the life of the party during college and shouldn’t be wasting money like the government did when they funded a $400,000 study to study glaciers from a feminist perspective.

There are several ways to save money when you go to college. Attending a community college tends to be cheaper than state universities and out of state colleges. Going to a community college for two years and then transferring to a four-year school to get your bachelor’s degree will save you lots of money. A majority of employers could care less about what college you went to school and care more about whether you have the degree.

Additionally, while you may recoil at the thought of living off-campus, it turns out that room and board can be one of the most expensive expenses in college. Living at home doesn’t look so bad against the average $10,800 cost to live on campus at a four-year public college. Factoring that into your monthly expenses guarantees you’re going to go into debt trying to pay.
Monthly expenses can be hard to manage, so consider doing a budget. Having a budget gives you control of your money and allows you to plan where your money will be spent. You don’t want to accidentally spend all your money on textbooks and leave none for food. Or the other way around, although it’s not like you’ll feel bad without textbooks.

Finally, don’t blow off saving for college. If you’re really serious about having a college fund, make sure to open a savings account and make sure to save plenty of money instead of spending it all as soon as you make it.
Given that the national student loan debt is $1.6 trillion, the nation is clearly in a student loan crisis. Don’t contribute to those statistics and ruin your life in the process. Student loan degree doesn’t sound nearly as good as a debt-free degree, although that could be just the alliteration.