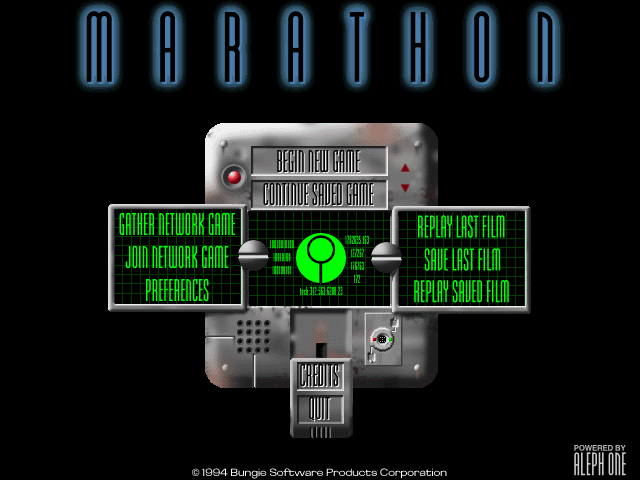 When people think about classic first person shooter (FPS) games, they often think about games like Doom, Wolfenstein 3D, Duke Nukem 3D, and a whole list of other games that pioneered the then new genre of games, and refined the FPS format during its first few steps. However, there is one trilogy of FPSs that seems rather unfairly overlooked, and that is Bungie’s Marathon Trilogy.

Marathon was released on December 21st, 1994, exclusively for the Macintosh computer. Since Apple was going through a rough period in their history, Marathon only had a fairly small consumer base. Despite this, the game was fairly successful and led to the creation of two sequels: Marathon 2: Durandal, and Marathon Infinity.

Despite the fact that the Trilogy is fairly overlooked, a base of loyal fans have led to all three of the games being released for free on modern Macs, Windows, Linux computers, iPhone & iPad, and has inspired Microsoft to release an updated Xbox port.

The Marathon Trilogy has one thing that Doom and other FPS games lack: a story. Sure these games have introductions in their manuals that set up the basis of the game, but games like Doom and Wolfenstine never mention the story past the manual. The Marathon Trilogy’s story is told in game and evolves as the game continues with multiple plot twists and crazy amounts of hidden background information that gives the Trilogy a universe rich in history.

The Trilogy is set in the 28th century, with the first game taking place in the year 2794 and both the second and third games taking place in 2811. The player plays as a security officer aboard a colony ship that has floated around the fourth planet of the Tau Ceti system still housing a significant portion of the population for the past 21 years after it’s 301 year voyage ended.

At 0820 hours the UESC Marathon is unprovokingly attacked by a race of alien slavers called the “pfhor” and two of the Marathon’s AIs (Artificial Intelligences) are severely damaged. The player, under the direction of the ships AI’s must help push back the pfhor invasion and save the surviving crew aboard the Marathon.

Starting off with only a pistol and their fist, the player is required to complete objectives given to the player in computer terminals spread throughout the game. These terminals also further the game’s plot, give interesting dialogue from the ships AIs, and include historical information that enriches the universe of the Trilogy.

The four main enemies that the player will face the most are the pfhor fighters, weak grunt like enemies who carry shockstaffs and attempt to swarm the player, pfhor troopers, who carry weapons similar to the player’s assault rifle, the pfhor hunters, who are large armored pfhor with a shoulder-mounted cannon, and the sph’t compilers, cybernetic slaves of the pfhor. The pfhor also possesses a number of alien slave races that the player must face.

Right off the bat the game showed two simple advancements that no other FPS games had at the time: vertical aim and mouselook. In games like Doom one could not aim up and down, instead as long as the player is lined up with the target horizontally the players shot would automatically hit them, not only that but the keyboard was the only option for looking.

Marathon was the first to invent these new innovations. The mouselook feature makes aiming & turning significantly easier and speeds up the pacing of the game, and the addition of vertical aim allows levels to be taller without preventing the player from seeing what’s below.

The levels are fairly atmospheric, the game utilizes various flashing lighting effects and dark rooms to give a moody dark tone to the game, all while a “heavy” synth soundtrack gives a charming old school sci-fi feel to the game.

The game has 27 levels in the single-player game, each split up into 6 different chapters. To complete each level the player is required to perform certain tasks such as retrieving an item, exterminating enemies, exploring an area, protecting defenseless crew members, solving puzzles, and occasionally simply finding the exit.

The game features a balanced arsenal of weapons specialized for different enemies and situations that keeps combat interesting. The first weapon the player gets is the .45 Magnum Mega Class pistol. It’s fairly accurate and it can be dual-wielded if another pistol is found, which keeps the pistol useful even after bigger weapons are found.

Other weapons included in the game are the Assault Rifle with a grenade launcher attached, the Fusion Pistol, the Flamethrower, the Rocket Launcher, and an “Alien Shotgun”. Each weapon is useful in different situations. The Flamethrower is extremely effective against organic enemies, yet ineffective against mechanical or armored foes, while the Fusion Pistol is extremely accurate and has a charged secondary mode and so on.

“G4 Sunbathing” is another level that many seem to despise, yet many others also love it for its atmospheric feel. In this level there is no oxygen since this part of the ship is heavily damaged, and consequently, the player must refill their oxygen tank periodically to avoid suffocation, not only that but many “oxygen-hungry” weapons such as the Assault Rifle, the Flamethrower, and the Rocket launcher do not function, requiring the player to fall back to smaller guns.

Where the game really shines are the alien ship levels. After one of the AIs acquire the means to teleport the player, the player takes the fight to the alien “mothership”. Bungie did a great job at making these levels feel, well, alien. Flashing and flickering on and off, pools of glowing alien goo are found around the dark corridors of the pfhor slave ship, parts of the ship pulsate as if they were breathing, and unconscious or dead humans lay on tables as if ready to be subject to biological experiments.

I can’t underscore the immersive atmosphere of these levels, even the music becomes more alien, large windows let starlight in casting large shadows, and through these windows, the UESC Marathon is visible floating in the vast void outside the pfhor ship.

The last few levels require the player to practically empty their guns with the hordes of enemies, and a new enemy is introduced, the Juggernaut. The juggernaut soaks up entire clips of bullets and is capable of shooting heat-seeking missiles that force the player to either outmaneuver them or take cover.

The end of the game takes a lot of work, especially if played on higher difficulties. I would only recommend the highest difficulty, “Total Carnage”, for the masochist and the self-hating. Finishing the game is so satisfying, after 27 levels the game wraps up the story, but not without a sequel hook that Bungie would later thank themselves for.

As this is a Bungie game and they’re famous for their multiplayer games, it would not be proper to leave the multiplayer unmentioned, after all Bungie themselves had to push Marathon’s release date back because they spent too much time “playtesting” the deathmatch mode.

The game allowed up to 8 people to play in one game, either in teams or by “every man for himself”. The game has 10 different multiplayer maps specifically designed for deathmatch, loaded with weapons to be used. Netgames are best played with at least 3 people, and 8 players are always fun. The game has a built-in real-time microphone chat, the first of its kind. At the end of a game you are given a series of graphs, letting you know how many times you killed someone, died, who killed who, and of course, the number of times you were unfortunate enough to use a missile as a close-range weapon.

In both multiplayer and singleplayer Marathon has aged surprisingly well for an early first-person shooter game. The Marathon trilogy distinguishes itself heavily from other FPS games through its rich story and technical innovations that make it feel like a halfway point between modern and early shooters. I’d recommend Marathon to anyone interested in classic games and casual gamers alike.