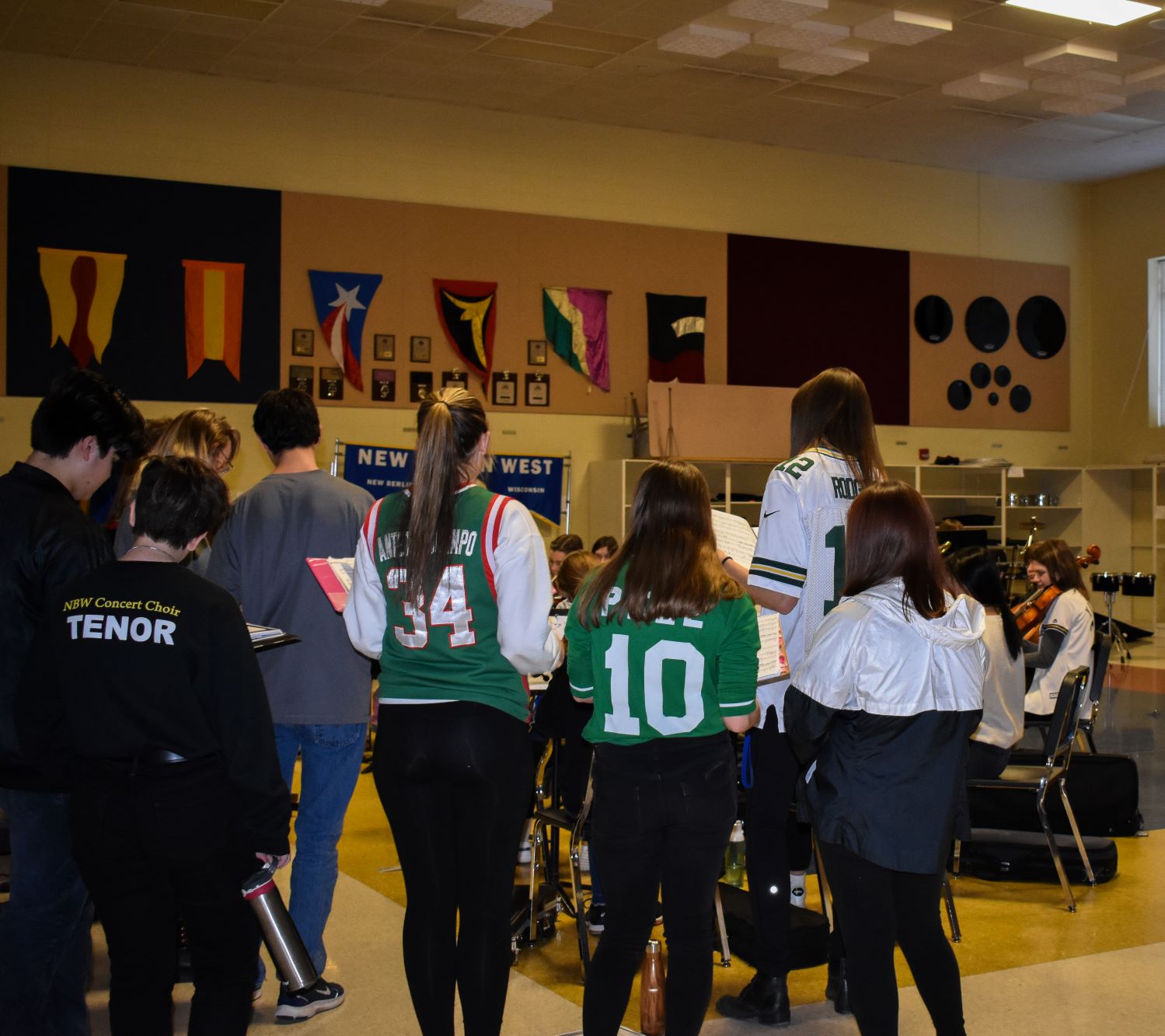 ▲
Cast of Legally Blonde rehearses with band in the band room.
Teagan Gumina

▲
Cast of Legally Blonde rehearses with band in the band room.
Teagan Gumina

Last year, WestTAP stepped into the 1990s with the musical Newsies. This year, WestTAP leaps into the 21st century with a new musical known as Legally Blonde.

Senior Olivia Vernon, who plays the lead as Elle Woods, said that Legally Blonde is one of the most modern plays to be performed at West. “Even Newsies last year was about the past,” Vernon said, mentioning that they even added a guitar, something that they’ve never used before in West musicals.

Senior Audrey Moczulewski, who plays Vivenne, said that its empowerment towards females in power made it a unique addition to the performances that WestTAP has put on along with “the general theme of staying true to who you are and working to be your best self and never giving up on what makes you special.”

Freshman Jonas Lee, who plays Warner in the musical at West, described the musical as bolder than the normal plays musicals put on, which generally approach historical themes and settings; however, this musical, the cast feels will appeal to the teenage audience.

Sophomore Alyssa Hutchinson, who plays Enid Hoops for the future musical at West, described the musical as, “more of an upbeat but it has reality checks and shows that life isn’t a perfect fairy tale. It shows that life doesn’t go the way you want, but even if it doesn’t, it still ends up good, and I think that’s amazing.”

Many things are also new in the creation of this play including rehearsals on Saturday, and a new choreographer, a former student at West by the name of Trevor Whittow.

“He pushes limits in the ways of dancing,” said Vernon about the new choreographer.

A lot of this is due to the difficulty of the musical in general, which they attribute a lot having to do with the energy of this musical. In fact, West student Mara Barczak, who plays Brooke, mentioned that in the show, she has to jump rope while singing.

Senior Alyx Knueppel, who plays Paulette, said, “This is the most energetic performances we’ve put on,” and, “The cast has to have a lot of energy.”

Barczak said, “The rehearsals have taken a lot of energy but it plays into that excitement of seeing the show come together.”

West student Ryan Bartley, who plays Professor Callahan and was also in the cast of West’s production of Newsies the year before, described the difficulty of the musical as a whole: “It’s a show where if you mess up, you mess up the entire show, but if you get everything right, the show is incredible.”

Backstage, Owen Fink and Caitlin Cotter are two of the many members involved with the creation of props and backgrounds that bring this musical to life.

According to Fink and Cotter, they have many things for the musical such as several backdrops, a news trailer, a bathroom, and a shower.

In addition, the musical also includes two dogs in the cast, which is the first time that WestTAP has used animals.

Now, for William Dettlaff, Vernon, Moczulewski, and Knueppel, this will be their last musical at New Berlin West.

“It’s bittersweet,” said Knueppel about Legally Blonde being her final musical. “I love this cast, and I can’t wait to see how this ends up.”

“I feel so grateful to have been cast in this role and share the stage with my three best friends in the world,” said Moczulewski. “I started doing theater in 6th grade, and I’ve never thought of myself as a singer, but it’s something I want to work on. I know I’m gonna cherish these memories of the show for years to come.”

“Theater is my passion and what I want to do with my life,” said Barczak about her inspiration to participate in the musical.

Bartley initially didn’t know who his character was, but his friends said he would do well in the role. “I just like being onstage with people who are talented as the cast we have,” he said.

Alyssa Hutchinson said that she loves acting, which is why she tried out for Legally Blonde. “It’s a dream of mine to be an actor or a part of the music business,” she explained.

On February 7 to the 9th, Legally Blonde will premiere in WestPAC.

“Just let me be legally blonde.”