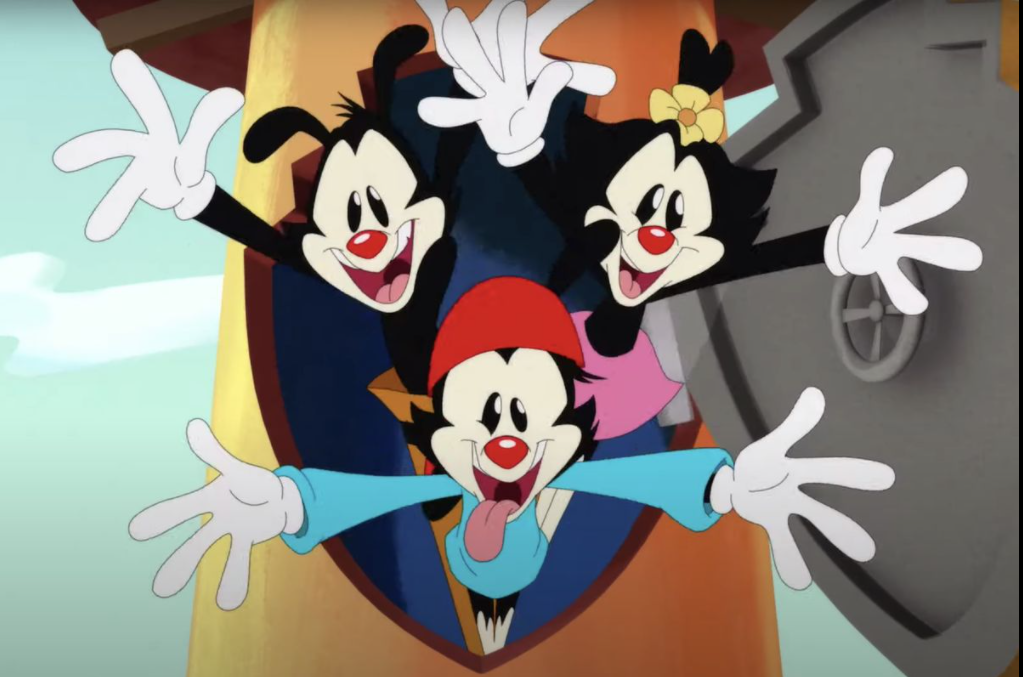 After almost 22 years of being gone from our television screens, the Animaniacs are back, but this time on Hulu.

The Animaniacs reboot follows the same original cast from the 90’s show reprising their roles. The story follows the Warner Family as they make mischief for everyone and everything around them while in a separate B-plot, Pinky and the Brain plan to take over the world together. Unfortunately, besides them, the rest of the cast has disappeared. Many fans were upset over the fact that many characters weren’t coming back whether that be Hello Nurse or Slappy Squirre0l. Although the writers on the show have said if they make more seasons they will likely bring them back.

The show starts off with a Jurassic Park parody, featuring the Warners taking the place of the dinosaurs and even using the original Jurassic Park score. This scene beautifully demonstrates how Animaniacs is a show that lives on parodies at heart. Following this, the show transitions into the actual story which is the Animaniacs finding out about the new world of 2020. This includes two new songs, one about what’s happened since 1998, and the other about reboots in Hollywood. Both songs have fun and silly melodies and really show how the Animaniacs appeals to adults and children with the songs talking about things like politics, and the new age of the internet.

However, talking about politics, many people are mad that the Animaniacs reboot had political jokes about women’s rights and Obama, but the thing is that the Animaniacs have always been political. The old show loved to poke at politics, and all its flaws and also loved to break the fourth wall. The difference is that in the old show, they hide these references about Bill Clinton and Prince, while the new show just says them without any sneakiness which sometimes children shouldn’t hear.

Now let’s talk about some of the positives of the show. The fourth wall jokes are funny and not just phoned in. The animation is amazing with so many combined styles they try to use throughout the show including Anime and Chibi.  If the show is paused at any moment it looks beautiful, and it’s easy to see that the animators worked very hard.

The voice acting is also very good. All the voice actors from the original show sound almost the same, except they are a little deeper. Speaking of the actors, they all do a great job in the songs which are just as good as the original.

Many other positive aspects of the show include how they are able to riff on today’s culture, and how the writing is mostly amazing. The only times the writing really falters is when the show relies too much on parody instead of the story. However, this only happens a couple of times meaning the rest of the show does a great job balancing the two.

There are a lot of positives, but also a couple of negatives. One of the biggest issues is the structures of the episodes. The original allowed the animators and writers to put in anything that fit the 30-minute format, while this one has a formula with the first story being a Warners cartoon, then a Pinky and the Brain cartoon, then a final two-minute sketch. This seems fine at first but soon becomes a problem, with it just seeming repetitive. Because of this, I’d advise not to binge the show, and only watch a couple of episodes at a time.

Another problem is that the show can be too satirical. Many times in the episodes, the show stops the plot to do a fourth wall joke. This can be fine, but sometimes it feels like they’re doing too much satire in some stories, and so little in others. The final problem is some of the stories. Many episodes have lame plots compared to others. One episode has Dot wanting cartoon rights, while the Warners fight to win a gold medal. The more entertaining one is the cartoon rights one, while the other one feels lame and boring when in comparison. It’s not that these episodes aren’t good, just not on pace as the others.

Overall, Animaniacs is one of the best reboots in a long time as it keeps the same feel as the original and really seems like the writers wanted to make it. The show is currently streaming on Hulu, as of November 20th, 2020.