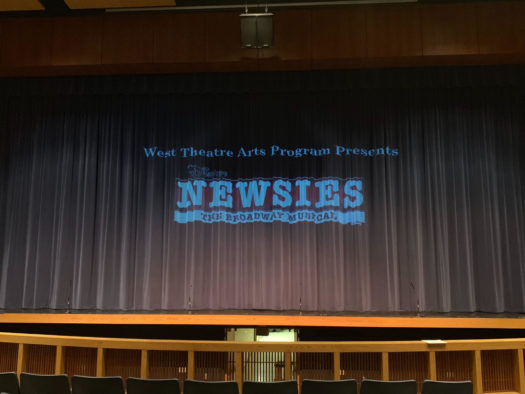 A classic musical spin based off a true story you may or may not know: Newsies is coming to New Berlin West Performing Arts Center.  After months of preparation, Newsies will hit the PAC stage this weekend. Judith Smith is the director of the production, as she has been for many other school plays and musicals here at West.

“It’s something like West has never done before,” says senior Evan McKenzie, who plays the show’s lead, Jack Kelly.

“Newsies takes place in the late 1800s,” said McKenzie. “And it takes place where there’s a lot of homeless kids on the streets and in order to make money and they sell newspapers for a big publishing companies. The story is about Jack Kelly and his newsies.”

When asked what she was most excited for the audience to see, Emma Barnes who plays Kathryn Plumber said, “Lots of big dance numbers.”

Newsies is known for its over-the-top dance and group numbers which is one thing that has made it such a successful show to play, which excites not only the audience itself but also the cast.

“This show is really fun, and the music is upbeat and jazzy, so I’m excited for them to hear it,” said William Dettlaff, a junior playing another one of the show’s leads, Davey.

Newsies tells the timeless and inspirational story of a successful strike/revolution and how that brought about change in our society, something that will always be relevant.

Marcus Hernandez, a first-year WestTAP (theatre arts program) participant who plays Wiesel, said it’s definitely “a good atmosphere.” He also points out that the story told is “a good ‘revolution’ because it tries to stop child labor, and that’s really telling”.

Although Newsies is an upbeat production, it’s meaning will stay with the audience even after viewing.

“It’s the story of a bunch of teenagers basically rising up against against adults who are unjust is really relevant today,” said McKenzie. “You talk about teenagers rising up during the shootings in schools today. People are becoming more political than ever; all those things, they’re really relevant and when you watch the show it becomes really apparent.”

For an inspirational story that will stay with you even after leaving this upbeat musical, come out this weekend to support Newsies, which opens this Friday, February 8th. 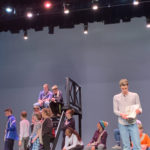 The cast rehearsing one of their opening scenes. 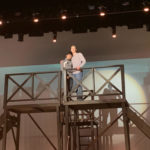 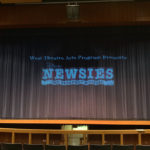 The newsies logo before the opening of the curtain for the first scene. 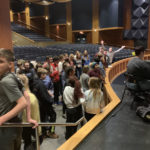 The cast warms up their vocal chords before rehearsal.