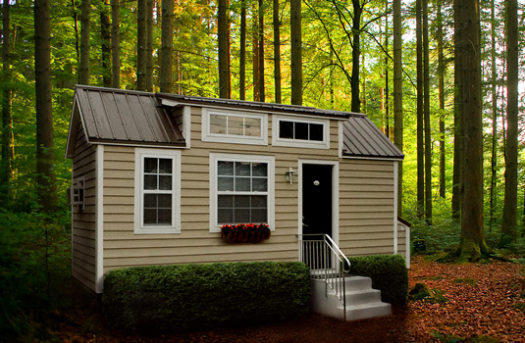 Shefer founded and co-founded many other small homes companies like Four Lights Tiny House Company, Small House Society. Many tiny homes are on the go, but they are different from the recreational vehicles on the roads.

Homes are considered tiny homes when they are under 500 square feet (averaging around $10,000), in comparison to the average house size of 2,600 square feet (averaging around $218,000), and are actual homes in areas like California, which is the top state for tiny homes according to The Journal of the American Institute of Architects; California was determined as the best state for tiny homes out of five states; California, Oregon, Texas, North Carolina and Florida.

Based on the tiny home communities, RV parks that are accepting to tiny homes, permitting/zoning opportunities, tiny house builders/architects, and towns that are specifically welcoming toward tiny homes. However, tiny homes cannot be built/brought anywhere just because of their small size, because of the Accessory Dwelling Unit (ADU) which concerns a building that’s sharing the space of another property’s area and makes it illegal to some states.

Tiny homes are considered a better, cheaper alternative in areas that are more expensive like California for the small amount of land the tiny homes take up in comparison to the size of the home and are more ecologically friendly.

Tiny homes are helping people in various ways besides being ecologically friendly; there’s a veteran community project which builds small houses for retired homeless veterans called Veterans Community Project (VPC).They wanted to provide a sense of security for homeless veterans and work with community partners to help them find a stable employment no matter how far or close the contributive company may be.

The VPC’s goal, along with providing a occupation, is to assist veterans find affordable homes as well.

Although tiny homes average around only 100,000 units, they are certainly a cheaper alternative, can be matched to fit anyone’s lifestyle, and take less time to clean. For people who are out of the house during the day and only come home to eat and sleep, tiny homes are certainly include more benefits.

This isn’t only an option for veterans as there is a website for purchasing tiny homes called Tiny Home Builders that is open for anyone to purchase from. Many of the tiny homes on the website are mobile and CSA certified, a Canadian standards organization which shows that the item that is being purchased has acceptable standards for safety and performance. Not only does this website sell tiny homes for affordable prices, it also gives the buyer background information on what to look out for in a tiny home, how to sell one, a towing guide, and even how to park a tiny home. However, even with the perks of a tiny home, some people would still prefer average or above average sized homes.

Overall, tiny homes have many benefits for people. The idea initiating from one person, leading to company foundations being built off of Tiny Homes like the Tumbleweed Tiny House Company and the idea of building small homes for homeless veterans. Tiny homes being built are typically affordable, safe for the environment, and have grown increasingly popular since 2012.