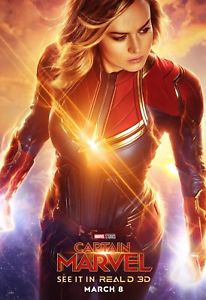 Captain Marvel, a moniker held by seven different characters in Marvel comics, is a role long plagued by controversy. In the new movie, Captain Marvel, these issues reared their ugly head once again but couldn’t stop Captain Marvel from being an above average superhero movie.

The new controversy was started around the iteration of Captain Marvel that the movie decided to feature, Carol Danvers. Most people, or at least Marvel purists, are upset that Mar-vell, the original Captain Marvel, was not chosen to star in this movie. This argument is almost completely unjustified as Mar-Vell has not been Captain Marvel since 1982 when he died of cancer from a chemical poisoning. Carol Danvers has been in comics since the 1960s, originally as Ms. Marvel, as well as sometimes Binary or Warbird, until she finally took up the Captain Marvel moniker in 2012.

Brie Larson, the actress chosen to play Danvers, then fueled the fire by saying things that some people view as “controversial”, but people chose to get offended anyway. In an interview with Keah Brown, a disabled journalist, Larson said this:

“About a year ago, I started paying attention to what my press days looked like and the critics reviewing movies, and noticed it appeared to be overwhelmingly white male, so, I spoke to Dr. Stacy Smith at the USC Annenberg Inclusion Initiative, who put together a study to confirm that. Moving forward, I decided to make sure my press days were more inclusive. After speaking with you, the film critic Valerie Complex and a few other women of color, it sounded like across the board they weren’t getting the same opportunities as others. When I talked to the facilities that weren’t providing it, they all had different excuses.”

This, and a few quotes about the movie not being for “white men”, left Marvel nerds unjustifiably angry, even raiding the Rotten Tomatoes page before the movie came out with bad reviews, causing Rotten Tomatoes to change their entire review system.

Despite these attempts to destroy the popularity of the movie, Captain Marvel perfectly updates the character and integrates her into the MCU with relative ease. The movie starts up with enough explanation of the Kree to give context to people who aren’t experienced with the story of Captain Marvel, and from there goes on an epic space battle, eventually ending up on earth in a 1990s themed nostalgia adventure. Nick Fury shows up in this movie, played by a digitally de-aged Samuel L. Jackson, and the banter between Fury and Danvers is really what newer Marvel movies are all about. The twists and explanations are nicely integrated into the film, and the first post-credits sequence is absolutely perfect.

The Skrulls and blue-skinned Kree are done rather well, and the shapeshifting abilities of the Skrulls are represented decently in the film with the assistance of CGI. They still feel like characters, and not just CGI puppets. The de-aging done to make the characters of Nick Fury and Phil Coulson feel younger is almost impeccable and really shows how far the technology has come.

Over all, Captain Marvel pushed past the hate wagon and brandished it’s 90s flair and Marvel style with competence, delivering a semi-obscure character straight into the limelight, setting her up as a new star of the MCU.