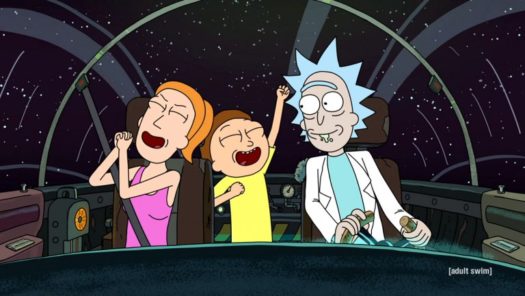 Rick and Morty kicked off its new season 4 on November 10, 2019, with a brand new episode where Rick temporarily died and Morty almost destroyed the world. Justin Roiland, the voice actor of Rick and Morty as well as many minor characters, does an amazing job on the first episode of season 4, as he did many voices for multiple Ricks in different realities with different personalities. The show, “Rick and Morty”, is based on the 1985 film, “Back to the Future.”

Rick Sanchez is a sociopathic scientist that reconnected with his daughter, Beth, and his son-in-law, Jerry Smith, played by Sarah Chalke and Chris Parnell. Rick’s grandkids, Morty and Summer Smith, played by Spencer Grammer, go on adventures with Rick through space and the multiverse with the infamous portal gun. During the end of season 3, Beth and Jerry finally got back together from their divorce which upsets Rick as Jerry limits him from going out with Morty on adventures.

Season 3 was “ok” in the sense of most episodes were about the divorce, but the “Pickle Rick” episode was by far the best one in the season that people were hoping for since it embraces Rick’s personality and gave some of the best scenes in the entire series. Rick turned himself into a pickle to avoid therapy with his family, making him fall into the sewer without any limbs. He used his genius to kill roaches and use their bodies as limbs, created a machine to give him a rat-based exoskeleton with weapons to escape the sewers while the family has therapy.

Season 4 had high hopes from Roiland and Dan Harmon, as well as most of the cast and producers for Rick and Morty but ran into a problem. As the Episode 4 preview at the end of Episode 3 revealed, the Adult Swim cartoon won’t return for two weeks. Rick and Morty is taking the week off for Thanksgiving, and while that might feel like a frustrating delay, it also confirms the mid-season finale, “Rattlestar Ricklactica,” will feel like a holiday special when it airs in the middle of December. It will be the fifth episode as the first five episodes were leaked on Twitter. Metacritic confirms that there will be 10 episodes in total that will be split evenly from 2019 to 2020 for the season.

Animation for the show is done using Toon Boom Harmony and background art is done in Adobe Photoshop. Production of animation is handled by Bardel Entertainment and Co-production is done by Williams Street. The animation style is amazing for a cartoon and it was inspired by “The Simpson” but made it slicker and changes the eyes to make it more like different in the pupils instead of the normal round iris.

Overall, the show is really good with it’s dark, funny humor with its imagination and season 4 is going smoothly as episode 4 makes many references and jokes that really represent the show. Episode 4 is a reference to “Shrek” as Morty wanted a dragon, Rick falls in love with it, and Jerry goes to Florida with a cat. The show is rated TV-14 and highly recommended to students for its uncanny imagination, its limitless humor, and its impact on culture.